Rochdale is a town about 10 miles northeast of the city of Manchester in England. In 1995 there were strange phenomena typical for what is considered a poltergeist, but it is actually primarily a case of mysterious appearance of water in the form of drips, rains and gushes. It also had phenomena that also show up with stone showers, like the repeated showers, suddenly stopping and starting elsewhere. Strange smells. Objects moving around, or disappearing and appearing. Although they try to connect the observed smells and the hearing of a voice with a dead relative, these are probably energy impressions in the local aetheric field that they are picking up. Energies of people are often imprinted into objects but also in places like homes. Psychics can read these energies and thus obtain information. When an earth's energetic field is particularly intense at a house, even ordinary people can pickup up on information that is stored in these houses.
Manchester Anomalous Phenomena Investigation Team decided to investigate the case.
For about a year the Garner family had to deal with repeated outpourings of water inside their house, soaking beds, carpet and furniture. Workmen and housing officers inspected the building and could not find a cause for the appearance of water.

“Sometimes the water breaks out in the form of huge droplets covering large areas of the ceilings and will disappear as quickly as it comes” Vera said. The water would also appear as heavy rain, apparently through the ceiling, but nothing was found that could explain it.
Mr. Gardner explained: “ It started about ten months ago when we noticed a damp patch on the wall in the back bedroom, which started to leak. We got the council in and they searched all through the loft but could not find anything leaking. We left it to see how it went and at first it stopped. Then we had what we thought was condensation on the ceiling. It started at one place, then it shot right across the ceiling from corner to corner and even seemed to curve around the ceiling light. It would happen in the bedroom and then stop, only to start in the kitchen. I rang the council again, and two men went in our loft while an electrician dismantled the ceiling lights whilst I was sat underneath an umbrella in the kitchen, that’s how bad it was. The whole kitchen was wet through as if it were raining. The council men had no idea what was causing it and in the heat of desperation they decided to fit a fan in the kitchen window.......Some good that did.
It finally stopped in the kitchen and started in Jeans front bedroom. It stayed there for four to five months. It happened every day and was causing a lot of upset in the home. When we decided to move Jeans bedroom to another room, it followed as if it knew. The council workmen came again and brought some detectors. They were looking for condensation. Of course, all prefabs will have some condensation, especially during the hot weather, but this was ridiculous.......
Then all of a sudden it stopped for about a week. We thought the ordeal was over. We moved the furniture back and lay the carpets again, and within ten minutes it was back with a vengeance. We daren’t put the stuff back down. Apart from the water, I was sitting here one night when the handle on the hall door turned and the door opened on its own. I was expecting someone to be their but we all knew there was no-one as we were all sat in the living room watching TV. Last Friday night we had decided to send Jean and her daughter to stay at a friends house as they were finding it difficult to sleep at night. Myself and Vera were the only ones in the house. We lay in bed and could both clearly hear someone coughing from the corner of the room. Even though a little scared I did thoroughly check the house and found nothing unusual. We’ve also smelt tobacco smoke in our bedroom and the smell of liquorice as if it was a flavoured cigarette paper.
Last night the hairdryer flew off the drawers and hit my grad-daughters friend on the back of the head. It seems to be more concentrated around Jean and her daughter when they’re here. The council first said it was a mystery, then said it was condensation, and when they accused us of throwing buckets of water on the ceiling, it was the last straw. We turned to the newspapers in hope of getting it sorted out. The family has lived here for 13 years and we didn’t really want to move out but what else can we do? The council official suggested we shouldn’t cook, shower or bathe due to our condensation problem. How are we to live under such circumstances ? Alison was found crying yesterday. She said she had felt a cold presence over her whilst lying on her bed and now its started banging things around at night and keeps us awake. We have even seen things fly off the wall for no reason and things that go missing and turn up in the oddest of places some days later when your not looking for it.”
...the most unusual thing was that we heard a radio working and when we went in to the front room, it turned itself off. When we checked it, we found hat it wasn’t even plugged in. Strange buzzing sound can sometimes be heard at night yet we are always unable to locate the origin.
When the mapit team stayed for an overnight vigil, they also encountered strange phenomena.

Eventually the Gardner family moved out because of the extreme stress they had to endure. The new family that moved into the bungalow were Asian and did not report any unusual experiences. However the Gardner's on the other hand went through similar experiences for two months in their new home. After which it suddenly ceased and never returned. Just as with stone showers, the energy fields sometimes locks onto a person, and when the person moves the fields stays with that person, until it suddenly disconnects and moves on. 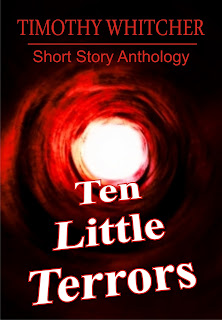 Tim Whitcher
Welcome to Helvetica's Indie Horror! I've created this blog to share the short stories that I've authored over the years. I'm hoping that you'll enjoy these stories as much as I enjoy writing them. I've been a fan of all things horror since my tender youth, starting with the Universal horror monsters, pre-code comics, 60s and 70s exploitation flicks, "made for TV movies," Warren Publications, etc. My writing is heavily influenced by all of the above. Enjoy a few chills! - Helvetica